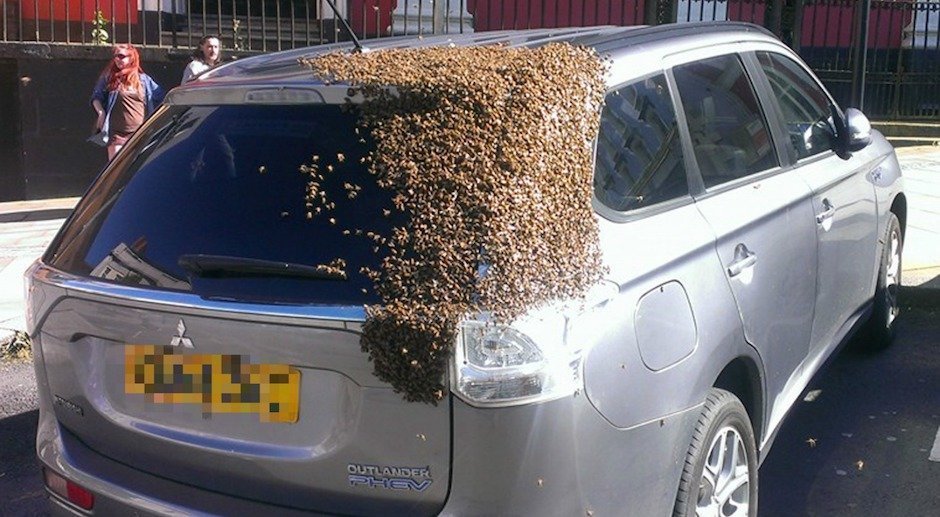 Three years ago, the UK had to deal with swarms of wasps becoming troublesome during the summer because of a mild spring that caused their numbers to soar.

While wasps were flourishing, a swarm of bees was trying to get their queen back from a car in which she was probably trapped. Considered a very rare incident by local beekeepers, these bees apparently followed the car with persistence for 24 hours, returning even after they were initially removed. Here is more about how dear a queen bee is to the rest of the colony and how these worker bees chased a car for her.

The queen bee is the mother of most, if not all, the bees in a colony. Since she is the sole adult, mated bee in the hive, the bees usually follow her anywhere and go to any lengths to protect her.

Queen bees are born after a queen bee lays eggs in the queen cups and one of them, a virgin queen, develops from a fertilized egg. This one queen is heavily pampered with “royal jelly,” a special protein-rich secretion from worker bees, and grows into a larger, sexually mature bee. So, the worker bees are understandably protective of her and defend their colony from other insects and even queens. The European bees are especially, known to be very competitive and often become defensive in response to competition from other colonies for the limited food sources and habitat.

On May 22, 2016, when 65-year-old Carol Howarth of Haverfordwest, West Wales, went shopping, her car was swarmed with over 20,000 bees attracting many passersby and thankfully a park ranger.

Carol Howarth was driving home from a nature reserve in her silver Mitsubishi Outlander and parked it outside the Three Crowns pub to shop. While she was away, thousands of bees swarmed onto the backside of her car attracting many passersby who began taking pictures of the scene. One of them was 41-year-old Tom Moses, a park ranger at Pembrokeshire Coast National Park, who noticed the big brown splotch and the people stopping to look at it as he was driving by. He became worried that the bees might be killed with pesticides or someone might do something and get hurt. So, he called two members of Pembrokeshire Beekeepers’ Association. The beekeepers brushed the bees into a cardboard box as quickly as possible and waited for them to fly away. Moses and one of the beekeepers, Roger Burns, got a few stings from the bees.

Believing that everything was back to normal, Howarth drove home after the incident only to find the bees back the next morning. The beekeepers believe that their queen was probably trapped in the car causing the bees to chase after it.

After finding the swarm of bees again, Howarth contacted the beekeepers who for the second time managed to remove the bees by six in the evening. According to Burns who has been beekeeping for over 30 years, it is natural for the bees to follow their queen but surprising and even amusing that they should follow the car for two days. Bees are believed to swarm during that time of the year, though this kind of behavior was strange. The theory was that the queen was trapped inside the car. About the incident, Howarth said light-heartedly that “perhaps they just liked the heat of my car.”

Bees are essential as pollinators for the fertilization of 90 percent of the world’s 107 essential food crops. Pesticides, loss of habitat, and air pollution have been causing a serious decline in their population.

The importance of animal pollination is immeasurable for both human and wildlife food production. It is estimated that 87 percent of the world’s flowering plant species depend on animal pollinators, as well as 35 percent of crop production and 60 percent crop plant species. These include the majority of fruits, many vegetables, seed crops, and also livestock feed.

In 2017, France could harvest only 10,000 tons of honey, which was one-third of the average annual harvest in the 1990s. According to a study by Hans de Kroon of Radboud University in the Netherlands that used 1,500 samples in 63 sites, the biomass of insect life in Germany has declined by three-quarters in the last 25 years. Though there is an increase in public awareness and many countries are passing laws limiting the use of pesticides, we still have a long way to go to restore the bee population.