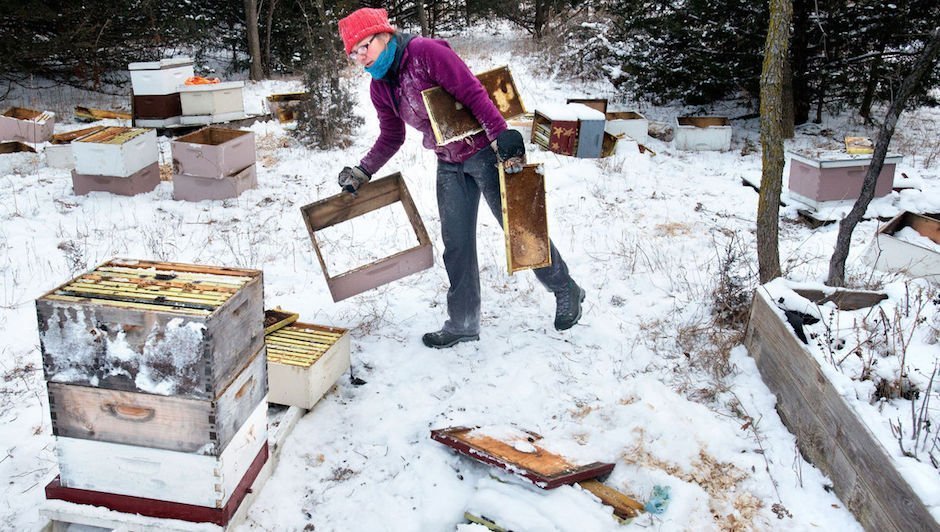 It’s understandable that a lot of people don’t like bees. However, bees are a vital part of our ecosystem and there have been very public campaigns to try and save the bees, which have been mysteriously dying off.

So it’s no surprise that the destruction of several bee hives in Sioux City, Iowa is being taken very seriously. Despite the damage being done by two boys, aged 12 and 13, a punishment of 10 years in prison is being considered.
Justin and Tori Englehardt, who own Wild Hill Honey in Sioux City, went to check on their honey bee hives on the morning of Dec. 28 and found all 50 of them destroyed. This resulted in the death of over 500,000 honey bees and more than a $60,000 loss to their business.

“They knocked over every single hive, killing all the bees. They wiped us out completely,” Mr. Englehardt told the Sioux City Journal.
He continued, “They broke into our shed, they took all our equipment out and threw it out in the snow, smashed what they could. Doesn’t look like anything was stolen, everything was just vandalized or destroyed.”

You can hear the heartbreak in Justin’s voice as he describes the moment he found the bees:

What’s worse is, according to the Independent, insurance companies don’t cover bees, so the Englehardt’s had to resort to a Go Fund Me page in an attempt to keep their business afloat.
Amazingly, the community has rallied together and the couple’s fundraising page had over $30,000 before it was deactivated.

“It’s thanks to those contributions that we’ll be able to rebuild in the spring,” Mr. Englehardt said.”We are deeply moved by your compassion. Between the contributions and the equipment, we were able to salvage, our needs have been met.”

He is also grateful for the local police force who was able to arrest the culprits within only a few days. Despite Wild Hill Honey being in a remote location and there being no witnesses to the crime, a number of tips and community leads saw the two boys caught quickly.

The boys, who cannot be named because they are juveniles, have been charged with criminal mischief in the first degree, agricultural animal facilities offenses and burglary in the third degree, as well as an aggravated misdemeanor, and possession of burglar’s tools.

These felonies can carry a penalty of 10 years in prison and a fine of up to $10,000. However, there has been a lot of public outcry concerning the case because those involved are minors. Luckily for them, prosecution for agricultural animal facilities offenses is rare in Iowa.

County assistant attorney Mark Campbell said, “I can’t think of any case where we’ve had prosecution in Woodbury County — I may be wrong, but I don’t recall anything.”

The case will likely be adjudicated in juvenile court, and regardless of the outcome or any potential penalties, the Englehardt’s are just grateful the boys had been caught so quickly.

“It’s huge, right? It demonstrates the professionalism and determination of the Sioux City Police Department and we couldn’t be happier,” Mr. Englehardt revealed.

While the couple plans to rebuild Wild Hill Honey, they are using their recent media attention to bring awareness to other hives that have been destroyed by vandals.
The couple believes that the public is more receptive to helping out in these cases because of the media focus on the recent plight of the honey bee.”Bees are critical and people are conscious of the fact that bees are having a hard time right now and facing some real challenges,” Englehardt said.

Populations are decreasing by about 30% each year, and while pesticides, parasites, and food resources play a role, no one has pinpointed an exact cause for the decline. Without bees, there would be no pollination, which is required for plants to reproduce.

We wish the Englehardt’s and their honey bees all the best.